HORACE WHITLOCK'S OILS
Search
On the following page you will find technical information about Horace Whitlock's clock oil.  If you ask 4 clock repair people about clock oil you will get 10 answers.  With that said, the information given here is the opinion of several professional clock repair people that have dedicated their carer to servicing and repairing mechanical clocks of all types, ages, makers and styles. Although the information is the opinion of several, it is just that, their opinion. Nothing here is set in stone, however, over several years of studying, testing and perfecting  a superior synthetic clock oil, we have found that Horace Whitlock's Synthetic clock oil is a superior oil, specifically designed for keeping the majority of mechanical clock running smoothly for many years.

Clock Movement
Just like regular oil changes extend the life of your car's engine, regular clock oiling extends the life of your clock. Oiling your clock every two years will prevent expensive clock repairs and ensure that your clock will last for generations to come. Imagine never changing your car's oil; it wouldn't take long for the engine to seize. Without regular oiling,  your clock will end up requiring a major service, or possibly a new movement. For those interested in learning how to oil a clock, this tutorial will show you how it is done.
​
A clock  movement is made up of 2 brass plates with gears in between the plates. Between the plates are the gears that operate the clock. In the plates are small holes called bushings.  The tip of the gear is called the pivot. The pivot sticks inside of the bushing. The bushings are perfectly sized to accept the pivot, with just enough clearance around them to allow the pivot to float inside the bushing. The pivot floats on the oil. Here is where the correct clock oil is critical. The pivot will float inside the bushing with the correct viscosity oil. Too thin of an oil and the pivot will sit on the bottom of the bushing, rubbing on the bushing, creating resistance and eventually, wearing the hole in an oblong shape then eventually stopping the clocks function. If the oil is to thick the same scenario will happen, however the thick oil will provide extra resistance in the pivot, slowing the clock or even stopping it. This is especially critical on the upper smaller gears (like the governors or the verge)that run at a higher speed with less resistance than the lower gears (like the mainsprings) which run slower and can handle some resistance. 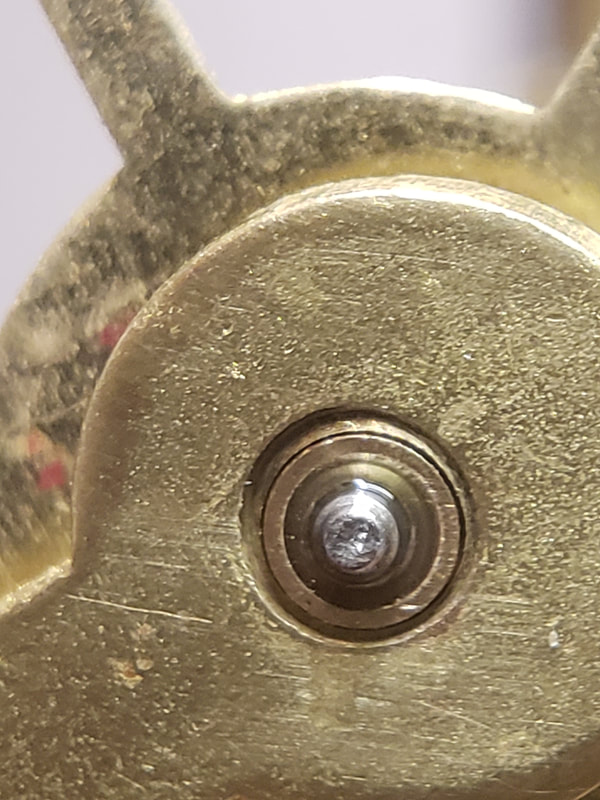 Always Use The Best Oil

The picture below shows a perfect example of the results of using an inexpensive oil. The oil on this clock movement was purchased on Ebay. The oil is sold by several people on Ebay and is very inexpensive. The sellers advertise  that this oil is perfect for every clock and is a good quality general oil. We have not tested the viscosity of the oil, however, we did purchase the oil and tested it on a older movement. As you can see in the picture below, you can see dark spots and dark oil tracks. These dark spots are the results of over oiled bushings that have run down the movement and have melted the lacquer. The melted lacquer has run down into other bushings and has gummed up the other bushing, therefore stopping the clock from running.

Unfortunately, the only way to revive this movement would be to completely dismantle the movement, clean in an ultrasonic cleaner as well as hand cleaning, along with other steps, then reassembling the movement.

As you can see, using an inexpensive oil is not worth destroying your movement.  The difference in cost between the inexpensive oil and Horace Whitlock's Premium Quality oi is less than $5.00 per bottle. 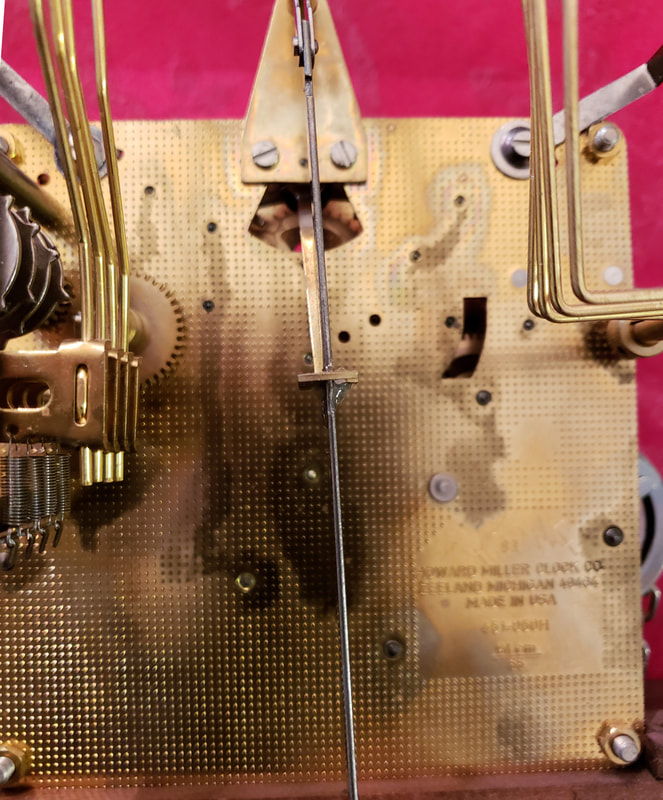 The viscosity of a fluid is a measure of its resistance to gradual deformation by shear stress or tensile stress. In other words: for liquids, it how thick the liquid is and how fast it will run.  An  example would be  syrup has a higher viscosity than water.

The proper viscosity  in relation to the item you are protecting is extremely important.  Clock oil's Viscosity should be around 215-250 cSt at 70 deg. F.